As countries set targets to achieve climate neutrality, the global horticulture industry is increasingly looking at renewable energy sources to reduce its carbon footprint. However, more incentives are needed to encourage growers to invest in these low-carbon technologies.

This was one of the resounding messages to emerge from 'The future of growing fossil free’ – a key discussion that took place at the Vision Theatre at GreenTech Amsterdam on Tuesday, June 14 (2022).

Smekens said: “CHP has a triple function for the whole sector and that puts it in a very, very strong position. So, the challenge to become gas free for the sector is quite big.”

CHP sees natural gas converted into electricity – the excess of which can be sold to the local electricity grid. It also creates heat, which is used to warm the glasshouse, and carbon dioxide (CO2) – which enriches the crops.

Bennett added that OGVG's producers depend on CHP boiler systems for their heat and CO2. "If we remove the boilers, if we remove the natural gas… the CO2 is going to be shipped in…, which I am not necessarily sure is the best carbon-friendly practice."

She added that, while Canada has not been affected by the energy crisis as greatly as Europe, input prices are nevertheless still on the rise. "Our growers are very much looking at all aspects of their business and figuring out how to be more efficient. Certainly, I think we have a carbon tax in Canada that's increasing every single year. So, at times like this, when the growers are really feeling that pinch from the extra costs, it's a bit of a challenge, because none of the government programmes are really aiming them towards more renewable [energy] sources or better opportunities – when I know growers are looking for these." 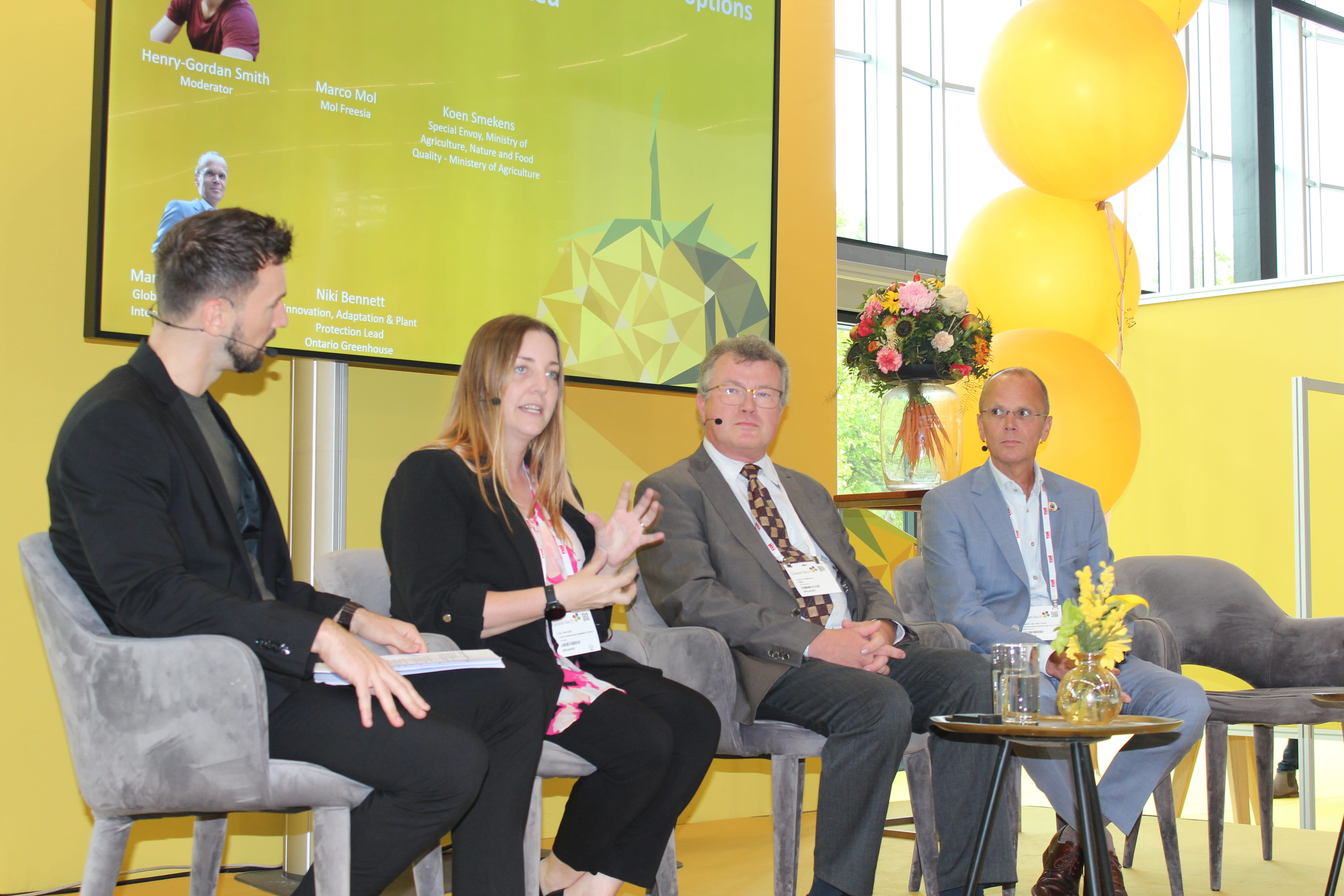 Preparing for a fossil-free future
Van der Hout opined that the successful transition towards fossil-fuel free growing will likely take several decades – and will be the result of a "triple helix" between government, entrepreneurs, and research and development.

Geothermal, hydrogen and wind were the low-carbon energy sources discussed during the knowledge session. With ten percent of greenhouse growers in The Netherlands already using geothermal, the country is a global showcase for this form of energy. This sees groundwater extracted from aquifers and the heat removed from the water before the water is returned to its source.

Van der Hout revealed that 50-70 per cent of greenhouses in The Netherlands could be powered by geothermal energy. However, Smekens highlighted that it would be challenging to install geothermal systems in all locations in the country because some growing areas have a long history of natural gas production. Geothermal projects operating at the depths where natural gas can be found could therefore pose a risk to public safety.

Smekens also made the point that widespread investment in geothermal energy (which sees some electricity used during the heat extraction process) would create a "bottleneck" in the country's electricity network.

Bennett agreed that "geothermal isn't exactly the best tool in the biggest growing areas." She advised prospective growers – or those looking to expand their farms – to investigate which renewable energy sources are available in their area "because not all [sources] are available at all times. And look at ways to incorporate different energy sources. It's unlikely there’s going to be any one energy source that is going to be the one we depend on."

The not-for-profit OGVG organisation, which represents 170 members in Southwest Ontario, produces tomatoes, cucumbers and peppers and has the highest concentration of greenhouses in North America.

Bennett informed the GreenTech audience that OGVG is investigating using electricity generated by existing wind farms. Given its location near the Great Lakes, OGVG is also investigating the use of hydrogen produced by water electrolysis that is powered by wind-generated electricity.

She explained that the wind farms are typically running at about 40% capacity. The group is therefore looking to run the wind turbines more often.

"We're hoping first to try to amend the boilers that we have with hydrogen, which would initially reduce our carbon [usage] by 10 per cent. We're hoping to get that up to 40 per cent."